I’ve been teaching some version of College Writing/Freshman Comp/ English 101 for approximately six years straight, and I really thought, that, by now, I would be revising this class every semester.

And yet, here I am, already revising in anticipation of January 2020.

I’m using the same textbook (They Say/ I Say with Readings), but I’m going back to a previous roster of assignments that should more clearly scaffold. As I design new assignment descriptions, I am being more explicit than ever about what skills are to be improved upon or acquired, how they relate to the previous and next assignments, and how these skills relate to their writing lives at large.

I’ve keep evolving my philosophy about this class – a class which seems to be designed to be all things to all people (and one that I’m never quite sure is getting the job done, whatever that job is supposed to be). After this semester, I feel more committed to:

None of this is particularly revelatory, but I sense that by not materially foregrounding these (actually typing this out right now, putting this on the syllabus), I feel like I lose sight of my priorities and the semester seems jumbly (to me, at least).

Still, I thought that I’d be done with serious syllabus/schedule revisions. I think more, these days, about unpaid labor, and contingency, and the dissertation that needs doing instead of the 47th syllabus rework.

I also think about how grateful I am to scholars like Raul Pacheco-Vega and other brilliant, generous people who share their syllabi and ideas with everyone, especially graduate student adjuncts like me. The inspiration for the upcoming NeMLA panel (Bridging the Praxis Gap: Tools for Early Career Teaching) I’m co-hosting came from this line of thinking – I’ve been very fortunate (and by extension, my students have been fortunate) to spend a good bit of time teaching myself, listening, reading, and learning more about effective pedagogy. It’s a luxury many if not most graduate students do not enjoy, and most if not all of us never get a class in pedagogy or even best practices for classroom management.

I don’t know where that class would fit, or where professional development fits (either in grad school or early in your career), especially considering the abysmal job market and the often-grim attitude towards higher education in the United Stated. I will be grateful to hear the panelists’ presentation in March and try to remember that being in continual revision could be a mercy.

Centering Myself While De-Centering the Author

If we were to punt the author from his perch as “solitary hero-creator,” and look at the swathes of people and technology and flora and fauna that networked and threaded together to produce the serial fiction with the author’s name on it … would we find evidence in that serial fiction of the blood, sweat, tears, and grease of those here-to-fore unnamed participants in the process?

As I work on my prospectus for my dissertation – which has the holding title right now of “Dickensian Ghosts in the Machines: Human-Nonhuman Assemblages in the Nineteenth-Century Publishing Industry” – I find myself meditating on what brought me to my current project. What thinking, what books, what people, what environment, led me to need to push back on the “solitary hero” narrative?

My first thought is that (a long time ago) I got very used to being in the corps de ballet. I occasionally got to perform solos, but often, I was a moving part of scenery, setting the stage for the soloists. In the corps, you must function as one – I guess we were Borg-like. You move together, you breathe together. No one person should attract attention. The beauty of the corps is to be living synthesis in motion, to bring the audience into a sublime state of perfect cohesion. I was pretty good at being a dutiful cog in pointe shoes, appreciating the value of obsessive synchrony in order to establish mood and context for the soloists and principals.

It did strike me more than once that the dancers chosen to be soloists were often the people who did not blend in well with the corps. They were good dancers – we were all good dancers – but they were not overly attentive to staying in the lines, as it were. They got promoted; we stayed behind, focusing on our seamlessness.

I also see how a relatively obscure children’s book has come to play quite a significant role in my personal philosophy, my teaching philosophy, and now this dissertation. I’m pretty sure The Country Bunny and the Little Gold Shoes (by Du Bose Heyward; pictures by Marjorie Hack) came into my life in the very best way: I think I got to order it on a Scholastic Book Order form when I was in grade school. If you are unfamiliar with this charming little book (I have two copies, actually; I could start a loaning program), this gist is this: a brown bunny from the country, named Cottontail,  who is a single mother to 21 bunny children, is chosen to be the Easter Bunny on year, and works harder than any bunny ever to fulfill her momentous tasks. I’m delighted to see that some people have picked this up as a feminist and anti-racist tale (my heart did a flip to see this!), and I certainly agree!

For me, though, the defining moment of the story is the section where Cottontail demonstrates how she can leave her home in the care of her 21 talented bunny children. She argues that her little bunnies work in pairs to complete every necessary household task, and that each task is no less or no more important than any other. This is true of the bunnies who have brooms to sweep the home, the bunnies who make the beds, the bunnies who sing and who dance, and the lone bunny whose job it is to pull out his mum’s chair when it is time to serve dinner.

I internalized the daylights out of this.

I suppose it’s a bit socialist of me, but that wasn’t my thinking at the time (I was, like, 9 or 10). It’s not even exactly my take on it right now. I fell a bit in love with they idea of everyone having a role to play, and everyone having use their unique skills to contribute. The bunnies who played music and the bunnies who danced to that music were as integral to the success of their household as the bunnies who mended clothing and the bunnies who dried the dishes. Every talent is valued and seen as vital to the creation of a harmonious household – so harmonious that Mum Cottontail could change lives and defeat the patriarchy!

So, I like systems of production, where each person and object and element can be identified (even though it may take time) and credited with producing the whole (effect? Object? Experience?). I think a distribution of credit can seem terrifying, but it needn’t be. I’m not advocating for tossing the Dickens out with the dishwater at all; rather, I am interested to better understand how Dickens is part of the assemblage that delivers The Pickwick Papers and Bleak House. I want to set him in the web that also includes points on a map indicating other actants: where a laborer is collecting esparto grass to send to the paper makers to make their products cheaper, and where the enslaved people in the American South pick the cotton that gets shipped to England as a raw good for processing. What if those lines of production did not radiate from one fixed point (Dickens) but, instead, intersected with each other and through Dickens, bursting through him in the form of the fictions published serially?

Right now, this image, in my mind, is a bit more extreme – rather than a tree breaching the soil, I’m thinking of images of the zombie fungus that bursts through ants. Bit violent, but perhaps it has merit.

Today was a good reminder that I am a hands-on learner — I can read and read, and until I actually install and use the program(s), I really don’t know what I’m doing. Thankfully, I am finally up and running on ArcGIS Pro (thank you, ODU IT folks, for helping me at a distance!), and while I am glad I’ve spent several months researching and reading about ArcGIS and Python, I realize that my “practice time” wasn’t all that effective. I should say, I quickly realized that I should put away all of my downloads and focus just on ArcGIS Pro, ArcPy, etc. Just work within that platform now, and take it more slowly than I would like.

That said, I spent some quality time just going through tutorials at the website and playing. I have had an idea of what I could do, and how I could do it, but playing with Python as a separate download is just different than interacting with ArcPy/Jupyter and ArcGIS API. I am trying to resist jumping ahead of myself because I want everything to be done now. Creating my first Jupyter notebook, meek as it is, still felt like a success today.

I am trying now to decide what data to include, how to include it — thoughts as I continue to learn and practice what I can do. I have my lists of paper mills, for example, but is it useful to plot them all out, for example? I’m also thinking, certainly, of how to curate layers, and how those layers could interact. Although it feels like I waited too long to get set up with the software, I actually think that having the time to get to know the data sets me up to make better choices.

That’s what I’m telling myself tonight. 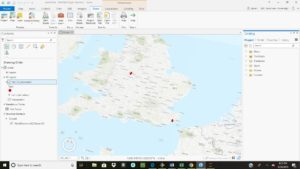 A screenshot of my practice map, with the same three papermakers identified. Now using ArcGIS Pro.

Today is the first “official” day of the materialization of my DH project. I will be updating regularly, detailing what I have done, what sources I am using, and what challenges I am encountering. The course of DH did never run smooth…

At this point, I have done a slew of reading, but only just today have I finally been able to upload a very wee CSV file and watch an ArcGIS map populate with a couple of papermakers in business during the 1800s. The tiniest step forward, but an important one! I am currently refreshing my Python skills, looking at how to effectively cull data that does not seem to be cull-friendly, so I can take my three little dots and turn them into a constellation.

I am thrilled to be presenting papers at Southwest Popular/American Culture Association (SWPACA) in Albuquerque, NM, and at NeMLA in Pittsburgh, PA, next year! I look forward to meeting everyone and attending as many panels and presentations as possible. I’ll definitely be tweeting up a storm.

SWPACA, February 2018:  “It is a hobby of mine to have an exact knowledge of London:” the allure of geography and nostalgia in Sherlock Holmes: The Devil’s Daughter

NeMLA, April 2018: Expect Resistance (To the Message): Effective Design in Protest Signs from 2017 Women’s Marches, at the NeMLA 2018 seminar panel,

“‘Nevertheless, they persisted’: The Aesthetics of Resistance.”

Find Me on Social Media